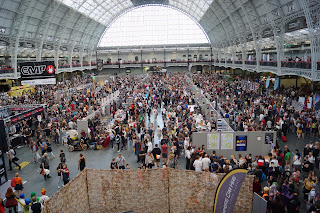 What and amazing day! Seriously, I had such a good day, even though I was dying from the heat in my cosplay, and my feet were killing me, and I had a 22 hour day after only 2 hours sleep, I still loved every minute of it.

We drive down on the morning of the day that we go, and I didn't want my make up to melt off before we even got there, so I waited till we got to the services for breakfast to put my Vanellope face on, which may have made people at Macdonalds think I was crazy. Especially since I didn't get dressed till I got there meaning I just looked like I was drawing on crazy black eyebrows.

We got down there at about 8 meaning we were in the queue for just short of an hour after we got through the bag check and in that time I gave Ralph (my mate Andy) a little surprise, I had made him the cookie medal that Vanellope gives Ralph in the film. Although I do think he was a tiny bit disappointed that I used air drying clay and not an actual cookie. 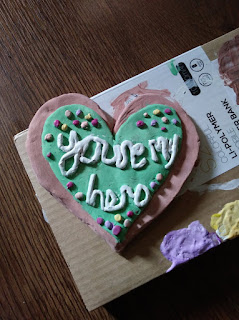 So I suppose without further ado, I should show you guys my finished costume, you've been with me for the whole time I made it, so it only seems fair. Here is my costume, and me with Ralph. Then of course me with the guys I go with (and Steve the chest burster) 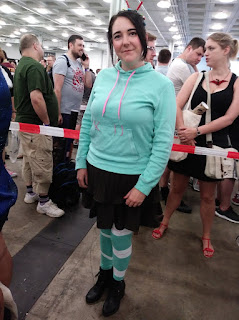 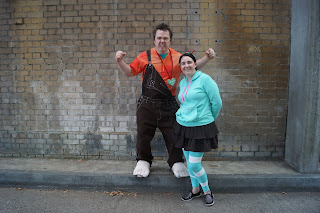 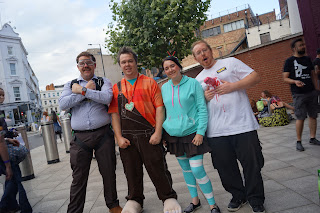 My friend Tristan was by far the most popular cosplay of the day (he always is), he was Peter from Deadpool 2, and he was such a crowd pleaser, he could barely walk 10 feet without being stopped for a selfie. Although he said that if he took the goggles off no one asked, so I can suddenly see how Clark Kent disguised himself just in glasses. 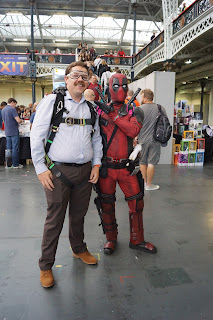 For once we actually had quite a stress free day at London, usually at this comic con we all have crazy schedules because of all of the guests. But this year I only had a 1 photo and 1 autograph to get both with the same person, which was Jewel Staite, who was lovely by the way. The guys didn't have too much to do either so it was a fairly steady day for us which was nice because it meant we could actually just relax and have a laugh together.

As always I got chatting with people in queues which is always fun since at comic con you can pretty much always find someone you have something in common with, especially if you are queuing to meet the same people. I met a cool guy in one queue who has a podcast that I now follow, which is great.

I think the best addition this year is that they kept a huge space clear in the centre of the main hall for people to sit down and rest, which considering the heat was much needed, I found myself there a few times taking a break. In the hoody I was extremely warm which is always a risk as at a comic con, I don't know how people do it in the full body and face costumes.

Jewel Staite was absolutely lovely when I met her, for both autograph and photo shoot. She was chatting with everyone at her table, shaking hands and being sweet, and was equally welcoming at her photoshoot. She was probably absolutely exhausted by that time in the afternoon, but you would never know that she was anything other than 100% pleased to meet every single person. 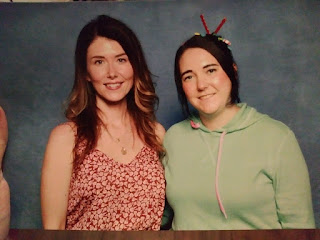 Other than meeting her, the other highlight of the day for me was attending the talk by Zachary Levi. If I could have afforded to get a photo with him then I would have, fortunately his talk was free to attend, and I'm so glad I did. He was funny, nerdy, and seemed genuinely excited to be there. Not only that but he genuinely seems like a good human being, so sweet and enthusiastic about everything, it was just a joy to watch him (he even seems to have melted my cold cynical heart).

By the end of the day we were absolutely exhausted, but we got a final lift when we were headed out of the venue and were shouted to stop by someone who wanted a photo of me and Ralph, which was a perfect end to the day.
Posted by Nicola at 01:06