To Snare a Witch by Jay Raven

No one dares spurn the lecherous advances of Sir Henry Cruttendon, 17th Century England's most reviled nobleman. To do so risks a retribution that would terrify the devil himself.

But Elizabeth Fiennes is no ordinary woman, blessed with stunning beauty, intelligence and guile. Coming from and influential family, she believes she is safe.

What she doesn't understand is that the Earl is determined to satisfy his lust and plans to use the wave of witch trials, fear and superstition sweeping the countryside to force her into his clutches.

And as he springs his malicious trap it triggers a chain of unholy events plunging hunter and prey into a maelstrom of deceit, terror and depravity - leaving them both staring into the face of true evil... 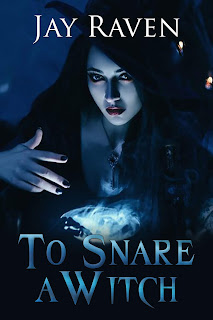 After reading To Snare a Witch I wasn't 100% sure whether or not I was happy or disappointed. That sounds rather negative, but that's not how I mean it. The premise of the book was actually interesting, and I did enjoy reading it, but because it is only 77 pages long, I felt like I didn't have enough time with the characters.

When I read a book the thing that generally catches me isn't the wonderful writing or complicated plots, it is the characters that I fall in love with. So even though this book was well written and had a great plot, I would have preferred it to be longer so that I could fall in love with Elizabeth and her beau more before the dark turns begin.

That being said I did enjoy reading it, I love history and horror so I suppose I count as the target audience for this book, and I do think there is potential for a follow up to it based on where the story ends, which I would read since it would allow me to spend more time with the people in the book, and also enjoy an extension to the story.

My favourite thing about the book though is actually the chapter titles, which might sound a little bit silly, but they are all lines from various rhymes that you learn as a child. I don't know why, but I found these little childlike titles juxtaposed with the dark content to be quite enchanting.

Overall a good little read, I would just have preferred a little more build up to the events of the story. 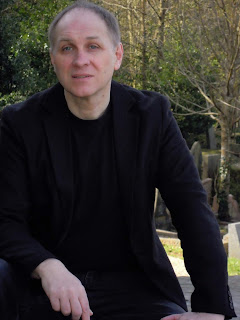 Jay Raven is the author of Gothic chillers and historical horror reminding readers that the past is a dangerous place to venture, full of monsters and murderous men.

He blames his fascination with vampires, witches and werewolves on the Hammer Horror films he watched as a teenager, but living in a creepy old house on the edge of a 500-acre wood may have something to do with it.
Posted by Nicola at 20:01